I have been drawing for most of my life. For the most part, it has remained a hobby of mine that I engage in purely for fun, rarely intersecting with my academic and professional work. However, I have found that the skills I have honed through this hobby have come in handy in my design work, especially when creating storyboards to visualize ideas.

Here is a collection of storyboards I drew for projects I worked on throughout my Master’s program. 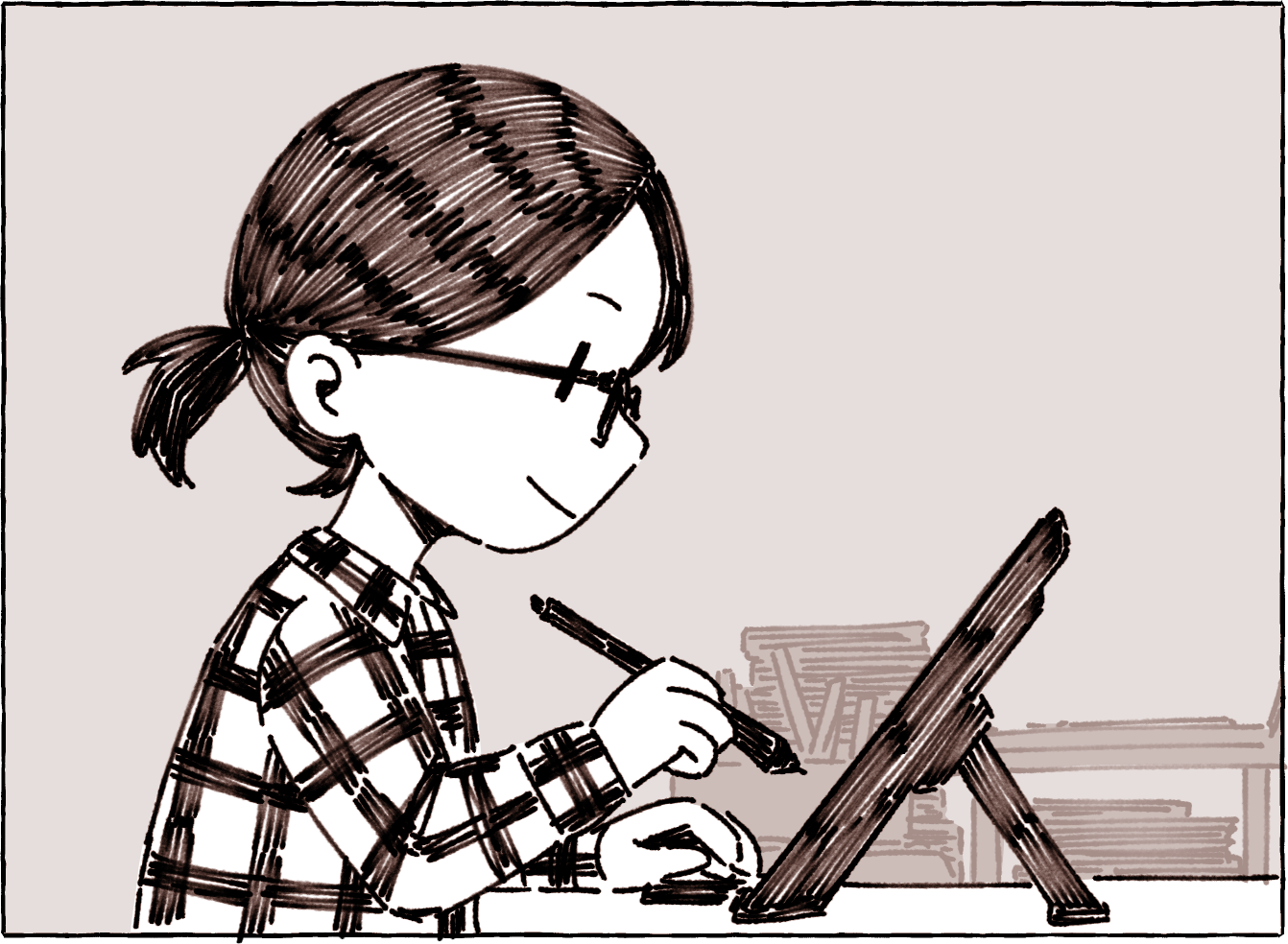 This was part of a small project done for a course called Advanced Interfaces. For this project, we were challenged to come up with an interaction with a physical interface situated in a public space that would create a moment of delight, joy, or reflection for the person interacting with the interface. The interaction needed to entice a person to come interact with it, allow them to interact directly with it, and provide some sort of feedback to them.

I came up with the concept of light-up stepping stones in a public park that changed colors and played musical notes when stepped on, providing park-goers an opportunity to be creative and have fun. 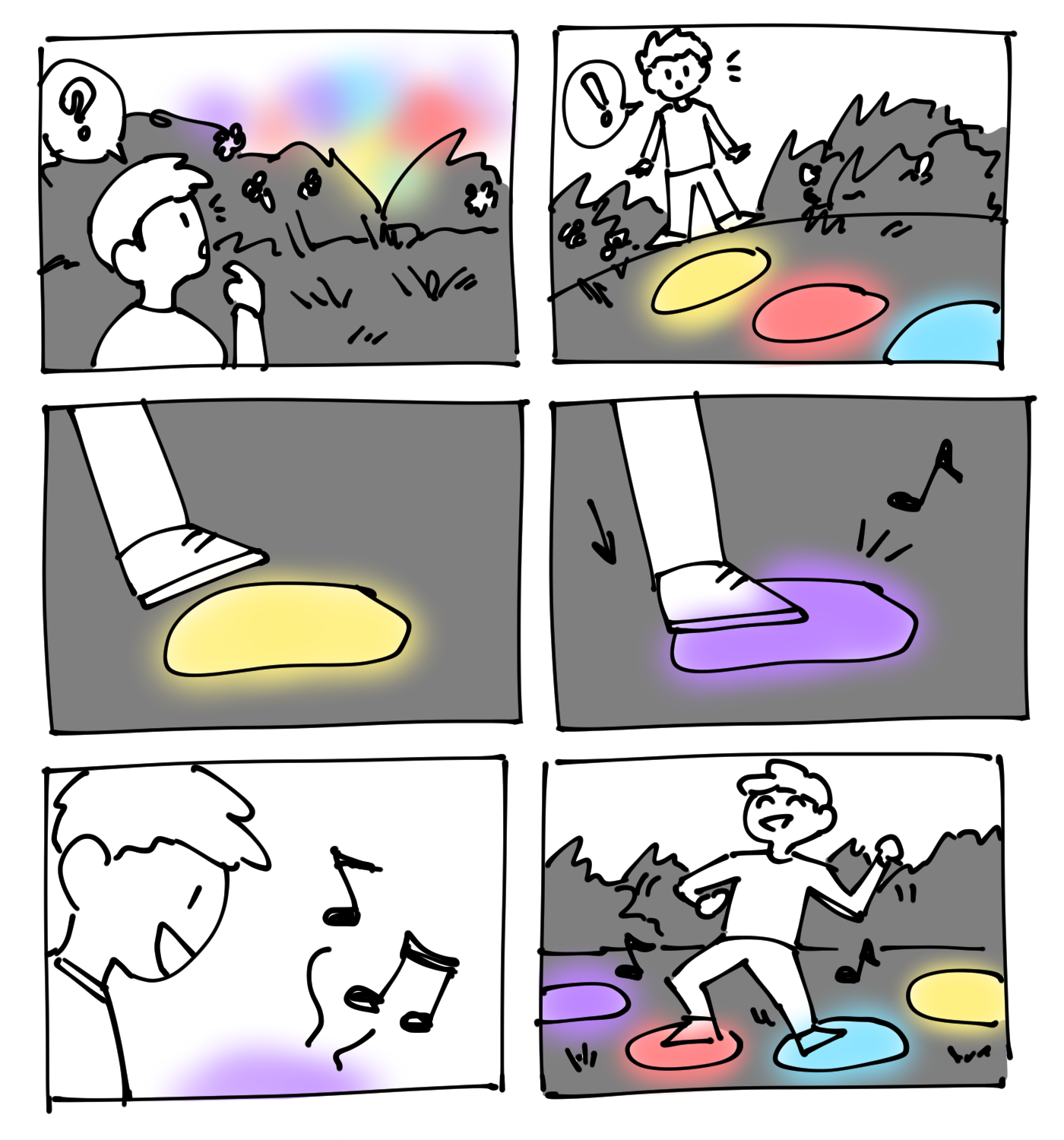 This was part of a small project also for the Advanced Interfaces course. The challenge for this project was to augment an everyday household ritual with ambient computing.

The ritual I chose was getting dressed. I imagined someone with an extensive wardrobe who has trouble deciding what to wear. The user could input factors such as the weather, location, and method of travel into the Wardrobe Assistant Mirror. The Mirror would then return an outfit suggestion comprising of clothing pieces from the user's closet, overlaying it on top of the user's reflection so they can preview it. Once they see an outfit suggestion that they like, all the user has to do is find those pieces of clothing and put them on. 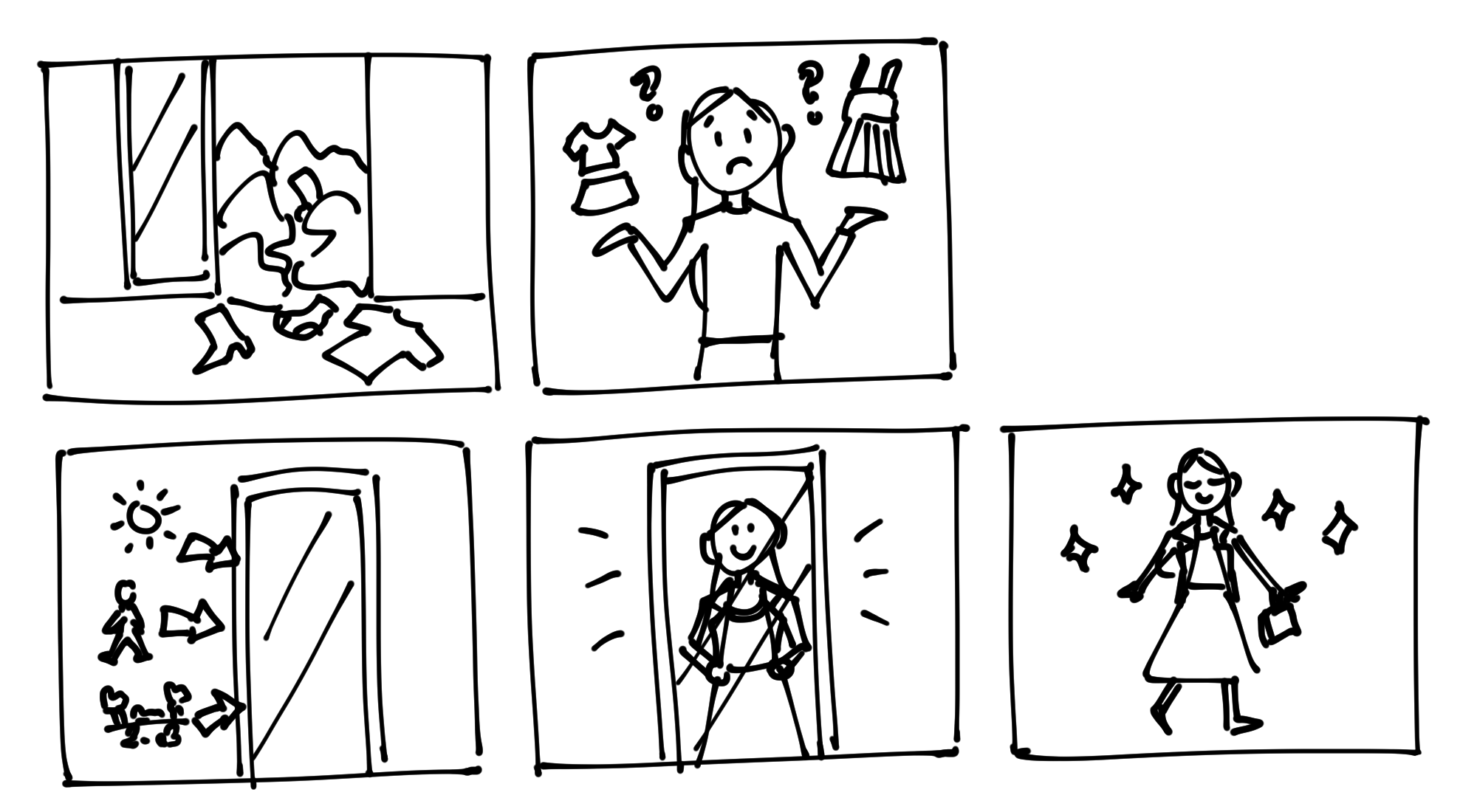 Shoops is a refinement and combination of the Wardrobe Assistant Mirror with another concept. These concepts combined led to Shoops, a clothing donation and AR experience.

Shoops would be situated in a public place, such as a recreation center. The system is comprised of a clothing donation box and a smart mirror. The clothing donation box entices people to donate their unwanted clothes by turning it into a minigame. Users toss their clothes through the hoop attached to the box, as if they were playing basketball.

When users are finished throwing their clothes in, they are able to choose an item of clothing to receive in return. The smart mirror next to the donation box allows users to preview different pieces of clothing on their body using AR. Once the user finds something they like, they confirm their selection with the mirror and the donation box opens up to give them their new piece of clothing. 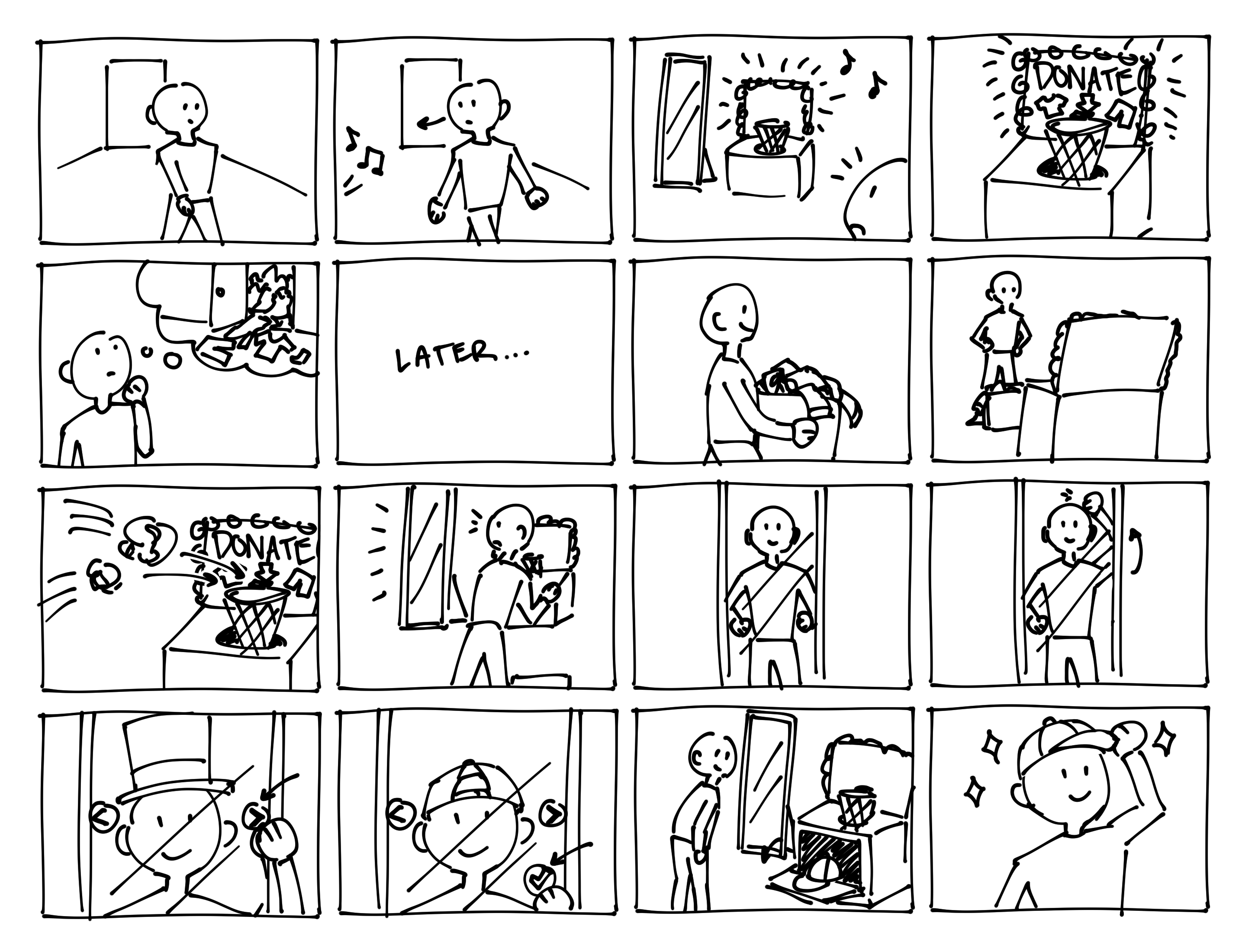 This storyboard was used as the basis for our video prototype.

This was our final project for the Advanced Interfaces course. We were tasked to design an interactive and immersive exhibit for a fictional museum surrounded by local businesses, which would also be in some way involved in the experience.

World of Wuxia is an immersive exhibit that allows museum patrons to experience the world of Chinese martial arts fiction and become a martial arts hero themselves as they embark on a journey through this ancient Chinese setting.

Patrons would stumble upon the entrance to the exhibit in the back of a local antique shop. They would enter a time machine, which would introduce the journey they were about to embark on. After changing into costumes, they step out of the time machine and enter the village area, where their quest begins. They visit different areas and solve puzzles to find the tools and learn the skills they need to defeat the evil king that rules over the land. 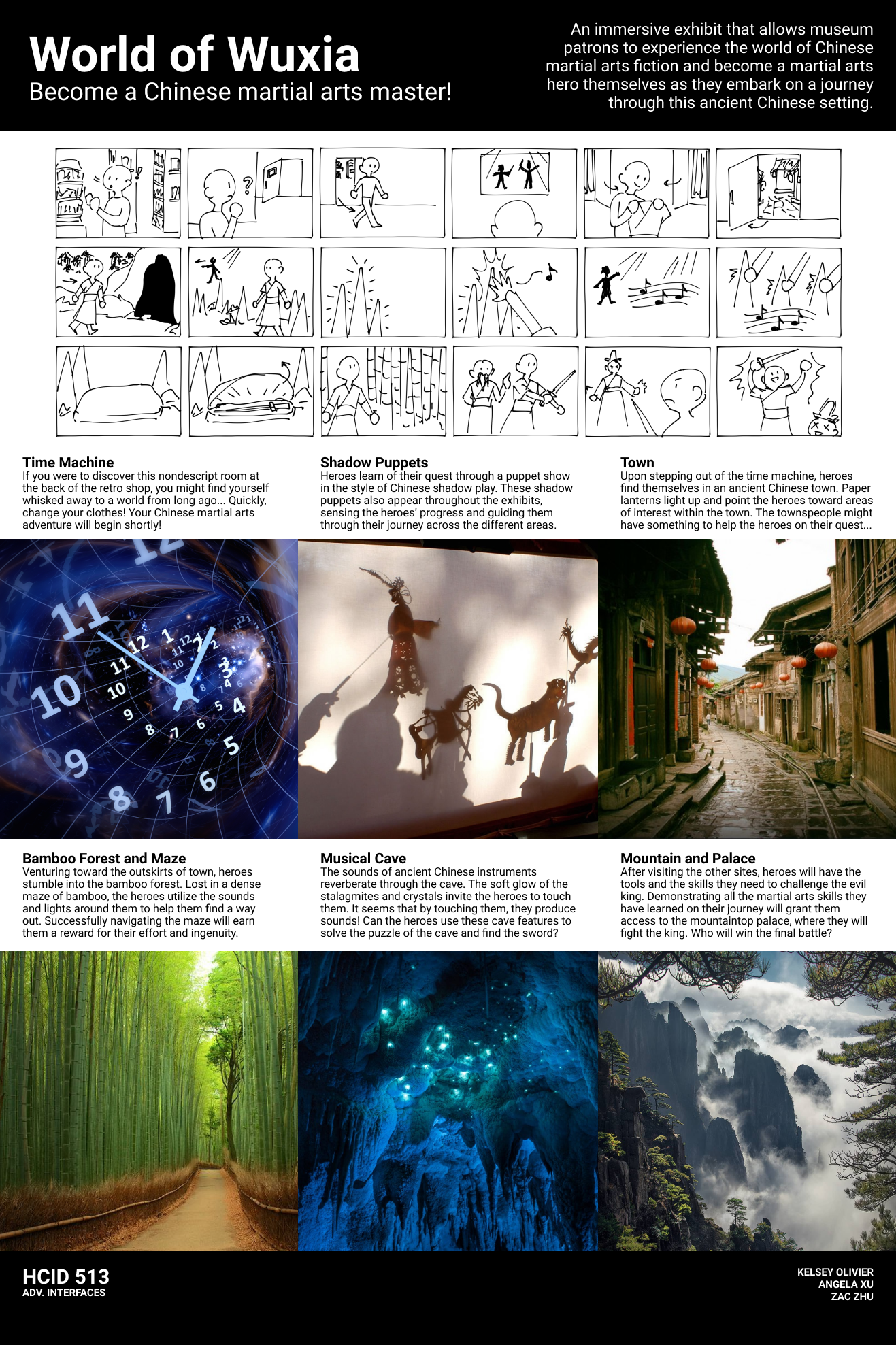 Work ‘n’ Play was a concept we explored while ideating for Helply but ultimately scrapped.

In a work-from-home environment, work and home boundaries are at risk of becoming blurred, which can lead to employees working when they should be resting or taking care of other personal matters.

To address this issue, Work 'n' Play offers a solution involving sensors placed around the home to create explicit boundaries between work and home. When a work device enters a designated no-work zone, the user is alerted that they shouldn't be bringing their device into that zone to work. 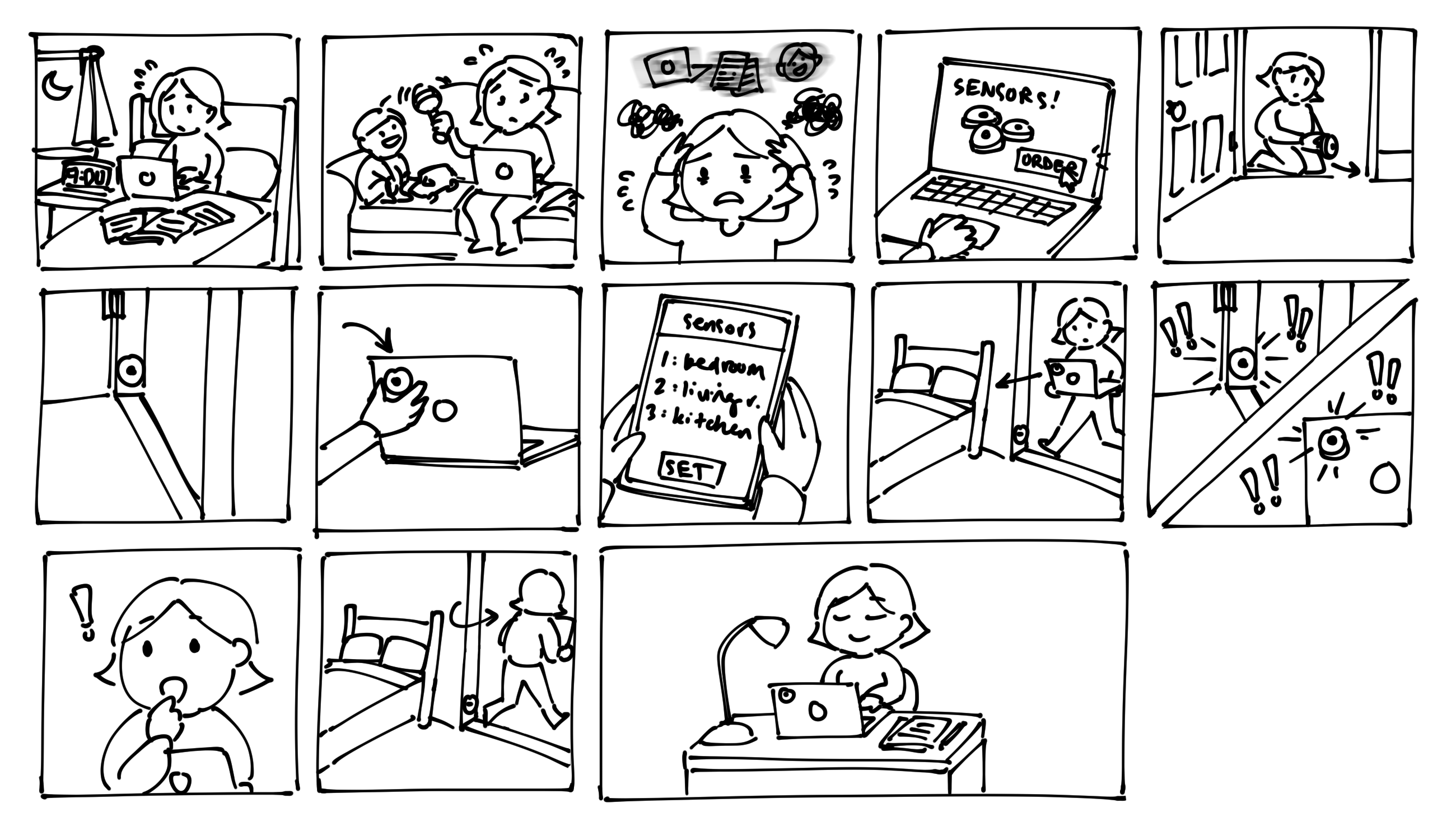 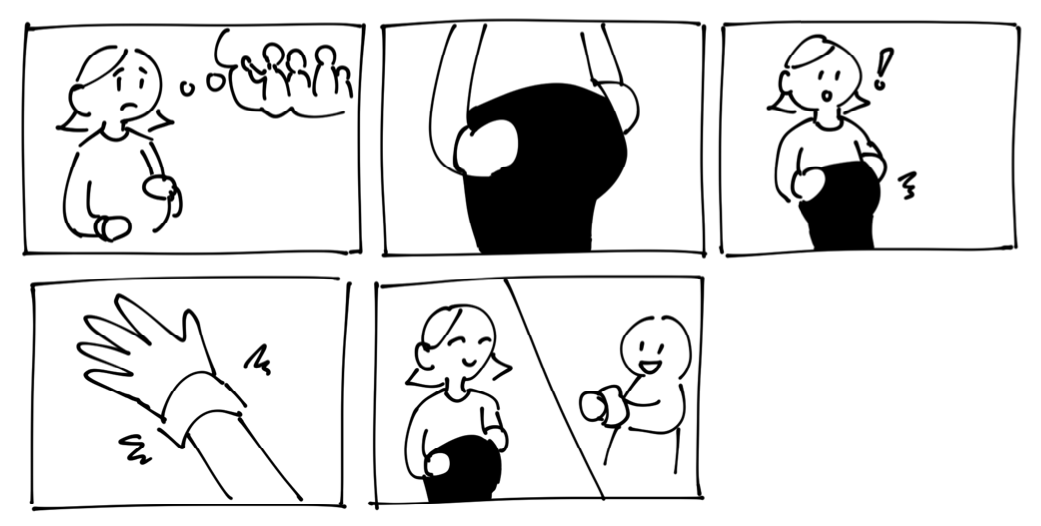 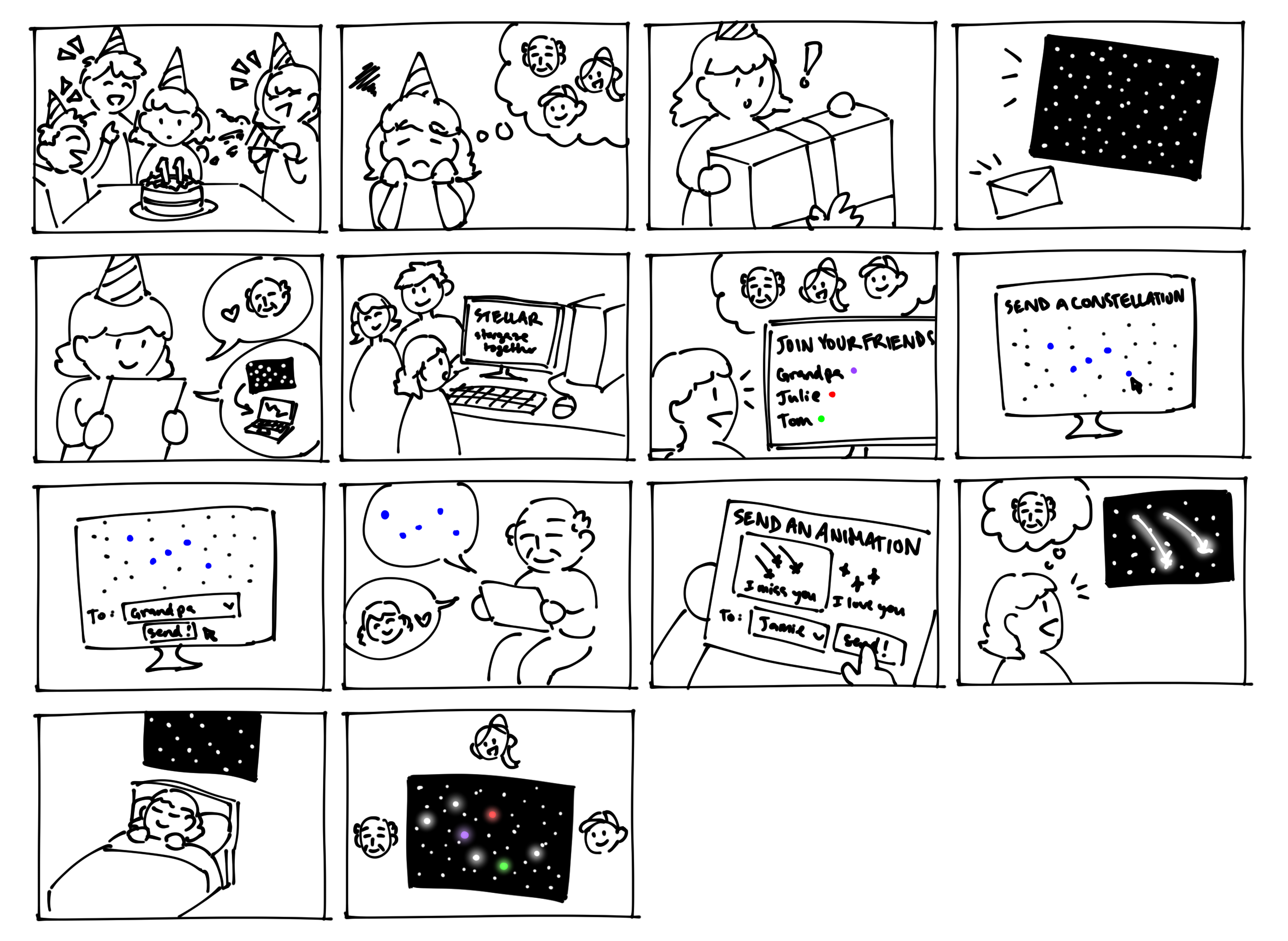 The storyboard for QuLab was done collaboratively. We divided the work of drawing frames amongst the three of us, then combined our individually drawn frames into one storyboard. We went through several iterations of this storyboard before landing on our final storyboard.

Shown below are various storyboard frames that I personally worked on. Many of these were scrapped or edited for the final version of our storyboard. The final storyboard is shown at the bottom. 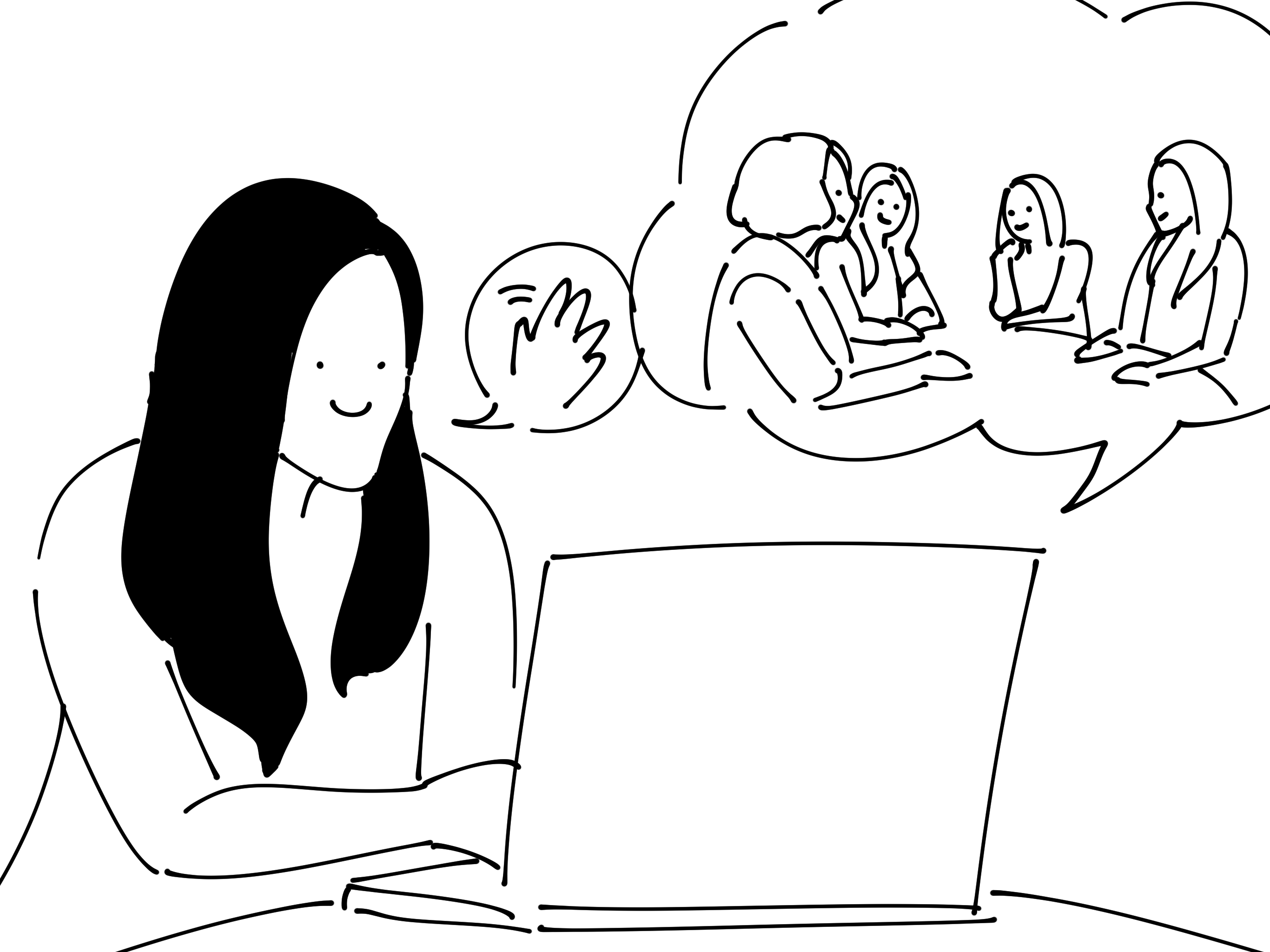 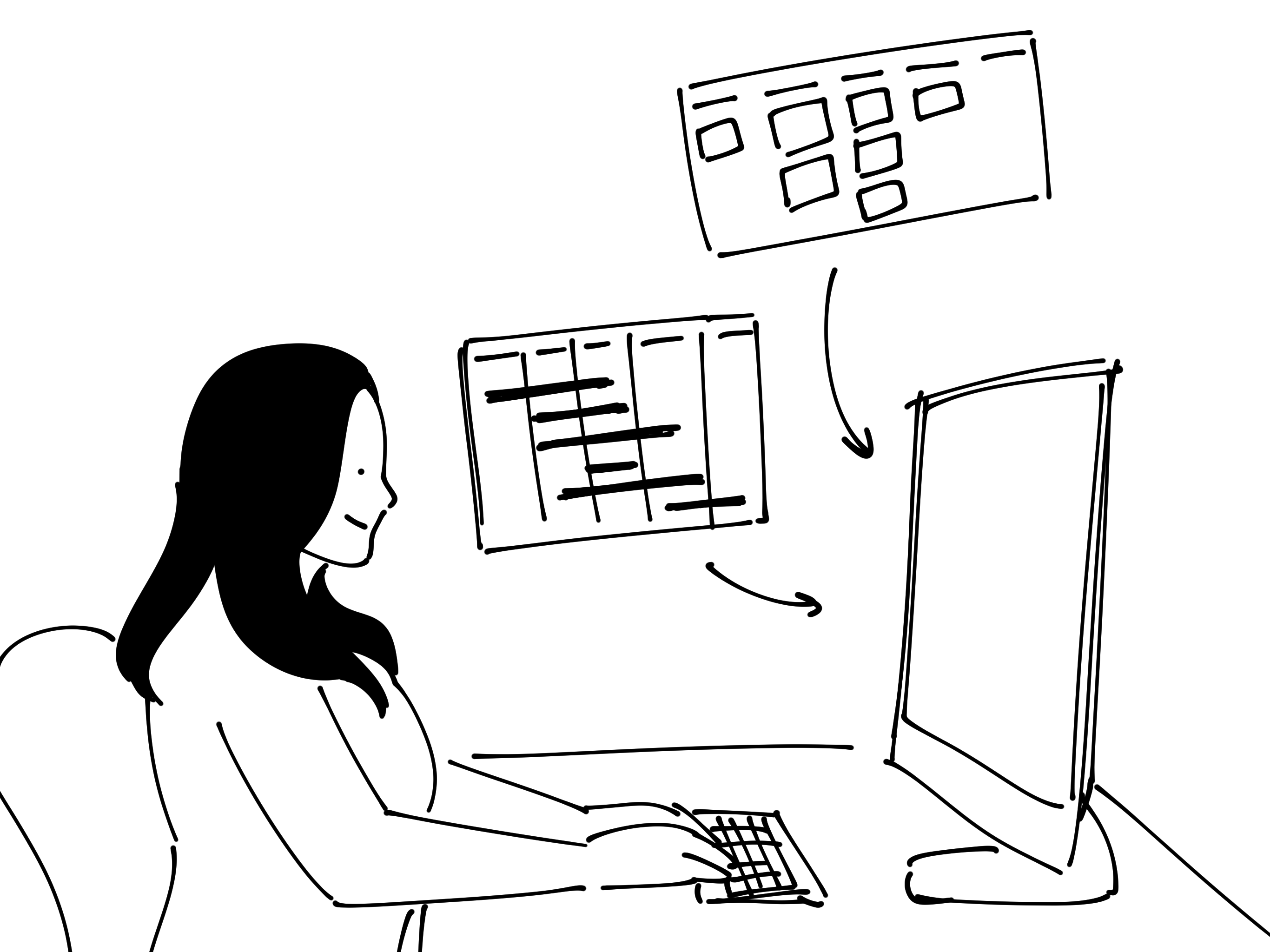 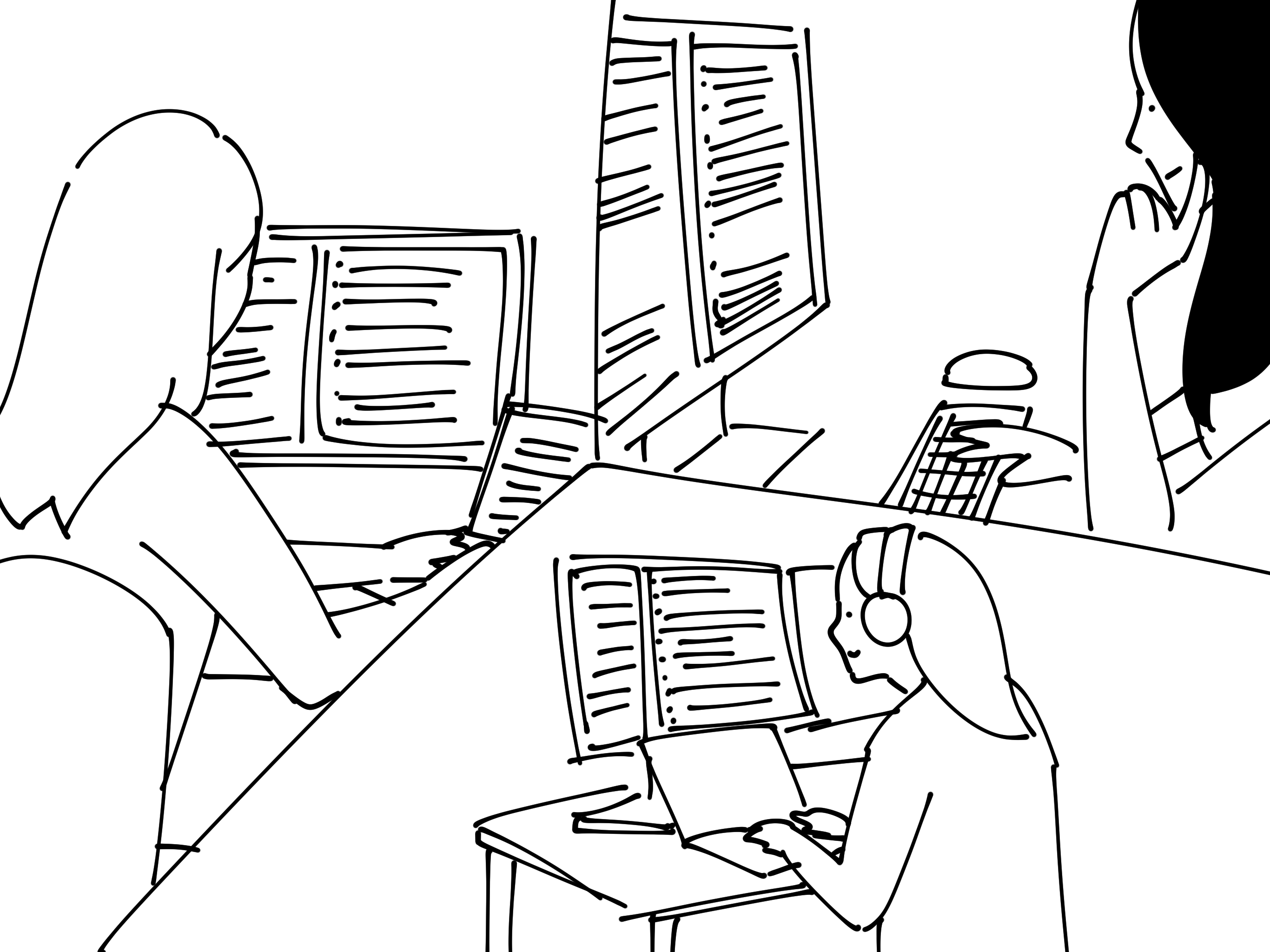 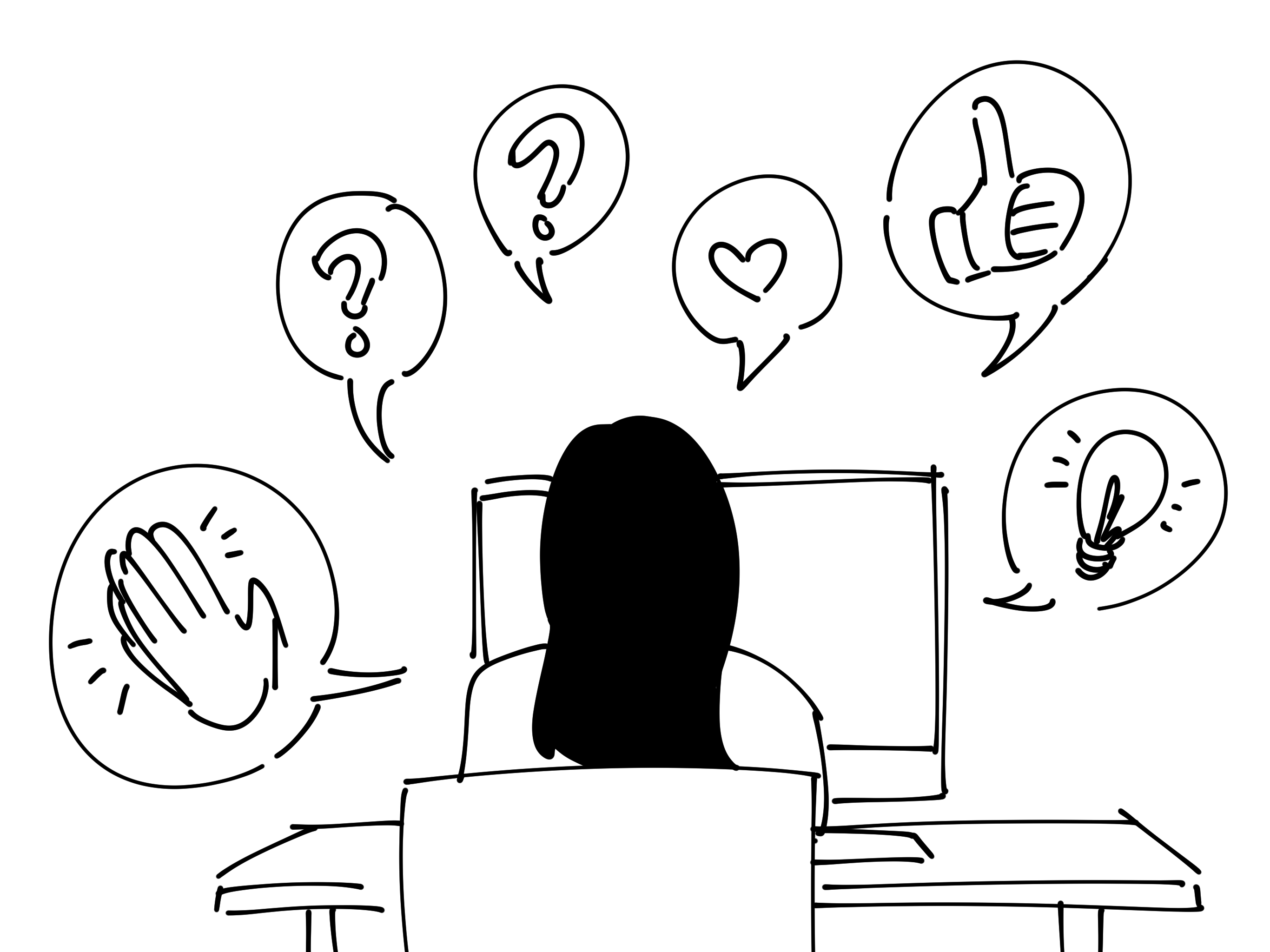 Frames that I drew for the earliest version of our storyboard. We ended up scrapping the whole storyboard after revising our story. 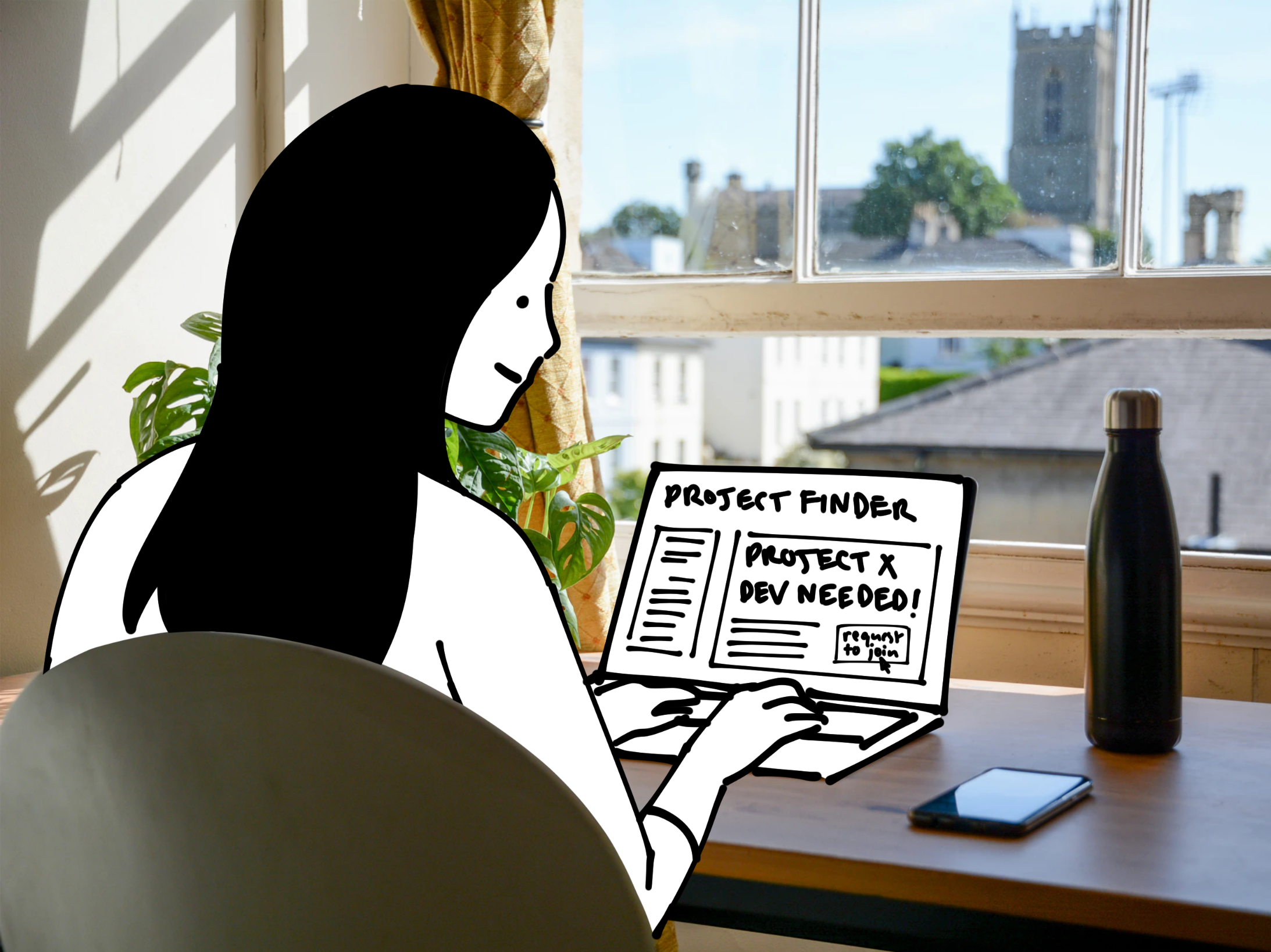 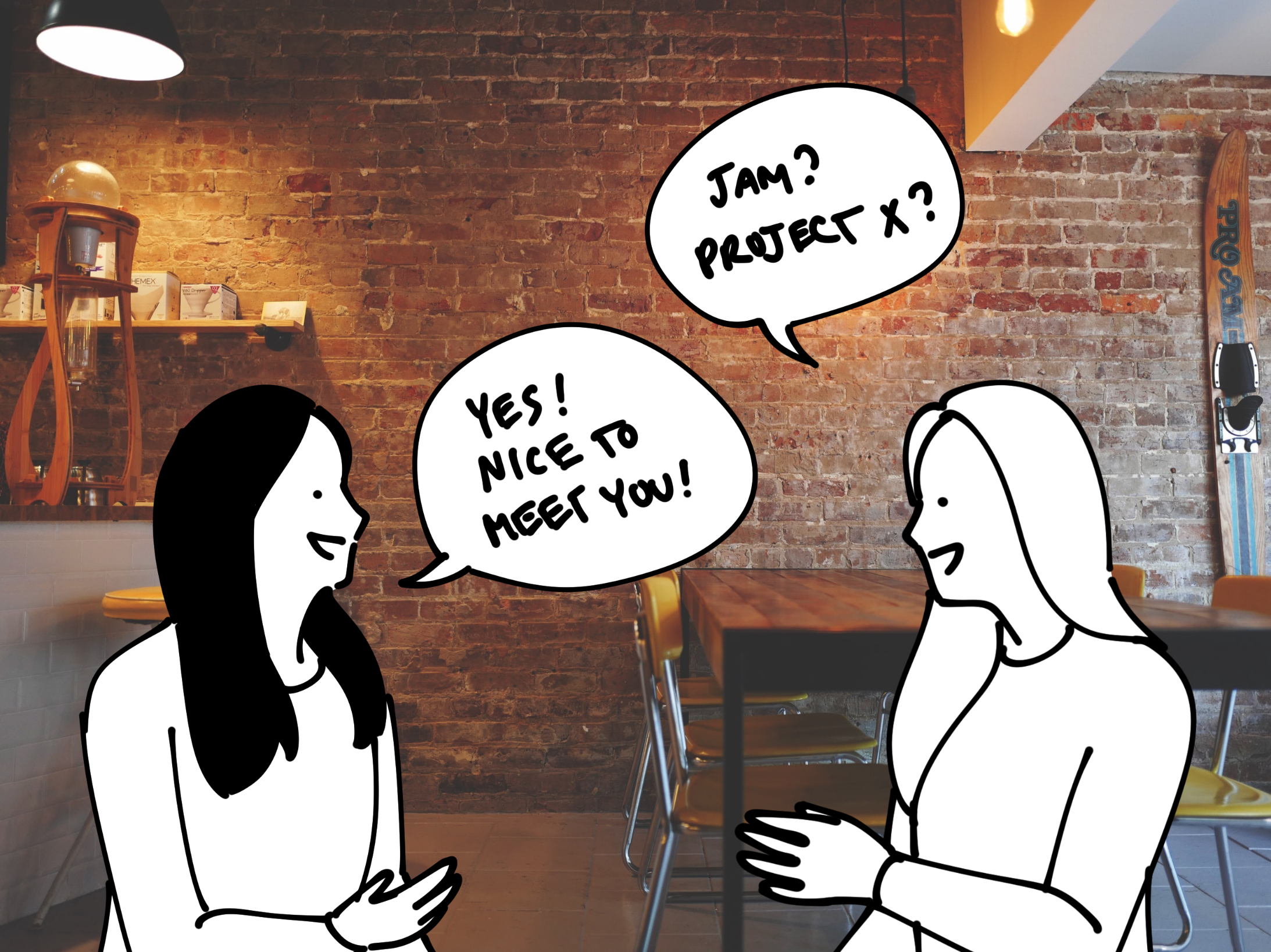 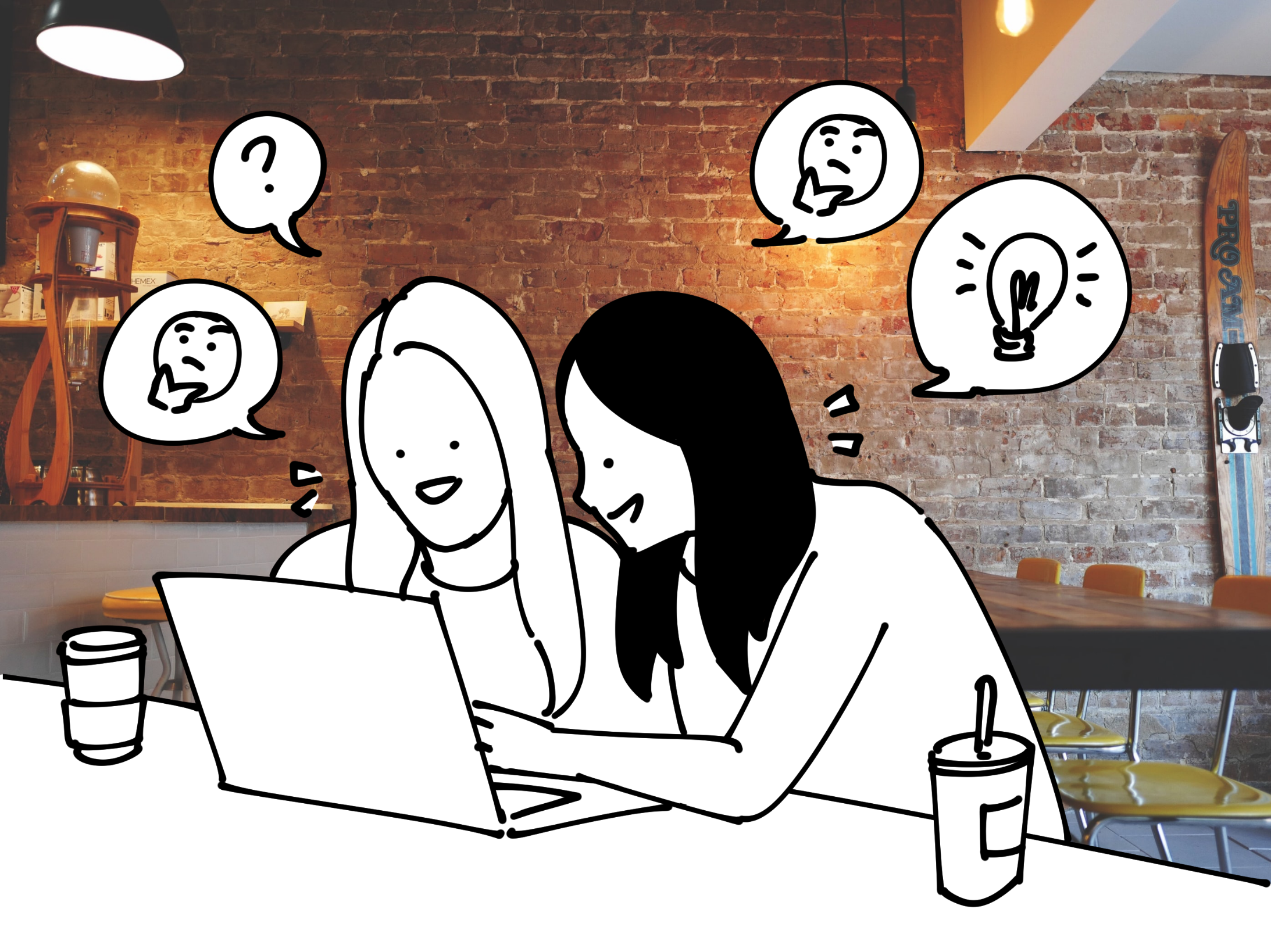 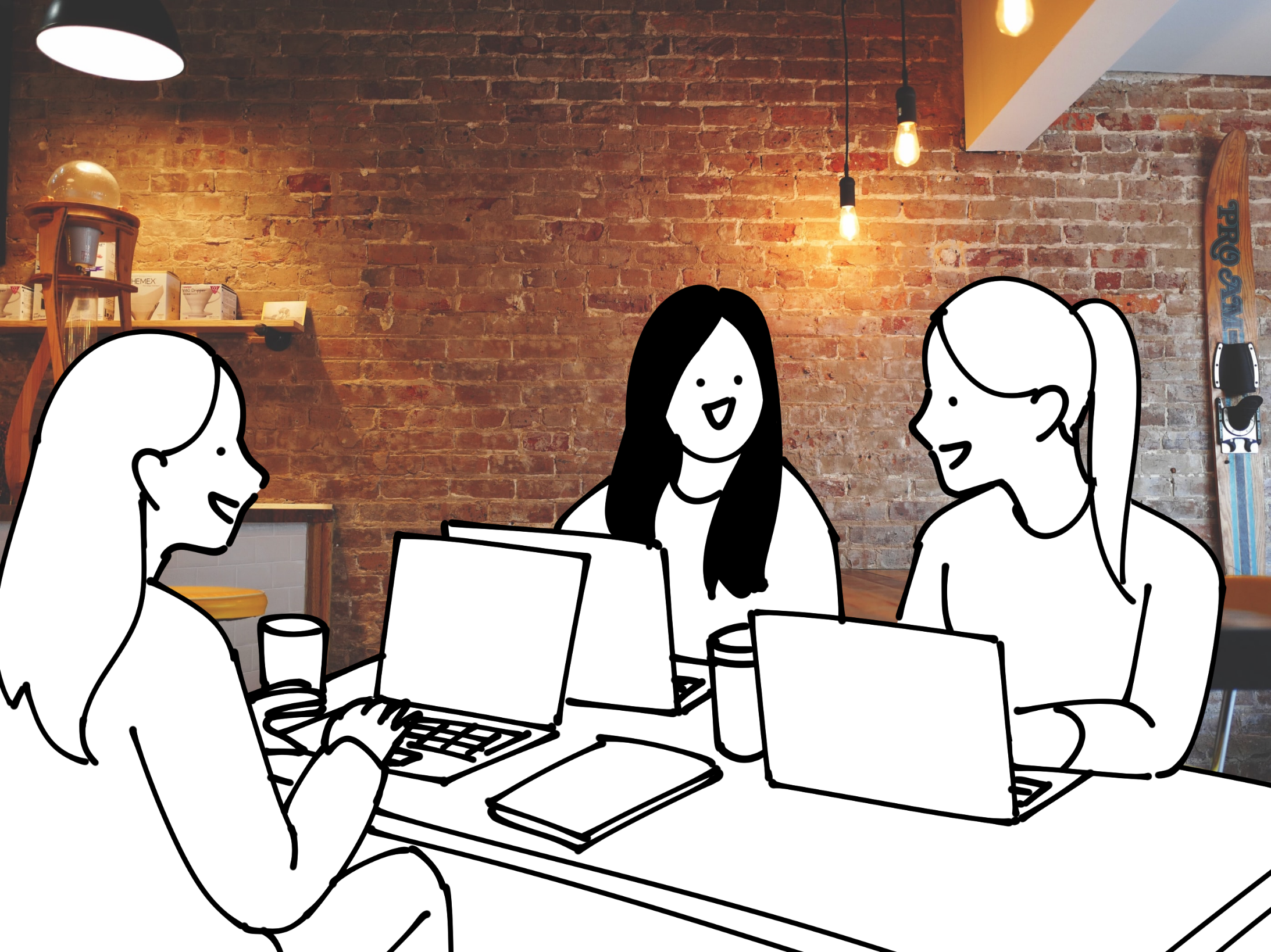 Frames that I drew for intermediate versions of our storyboard. Most of these frames were retained for our final storyboard but were edited. 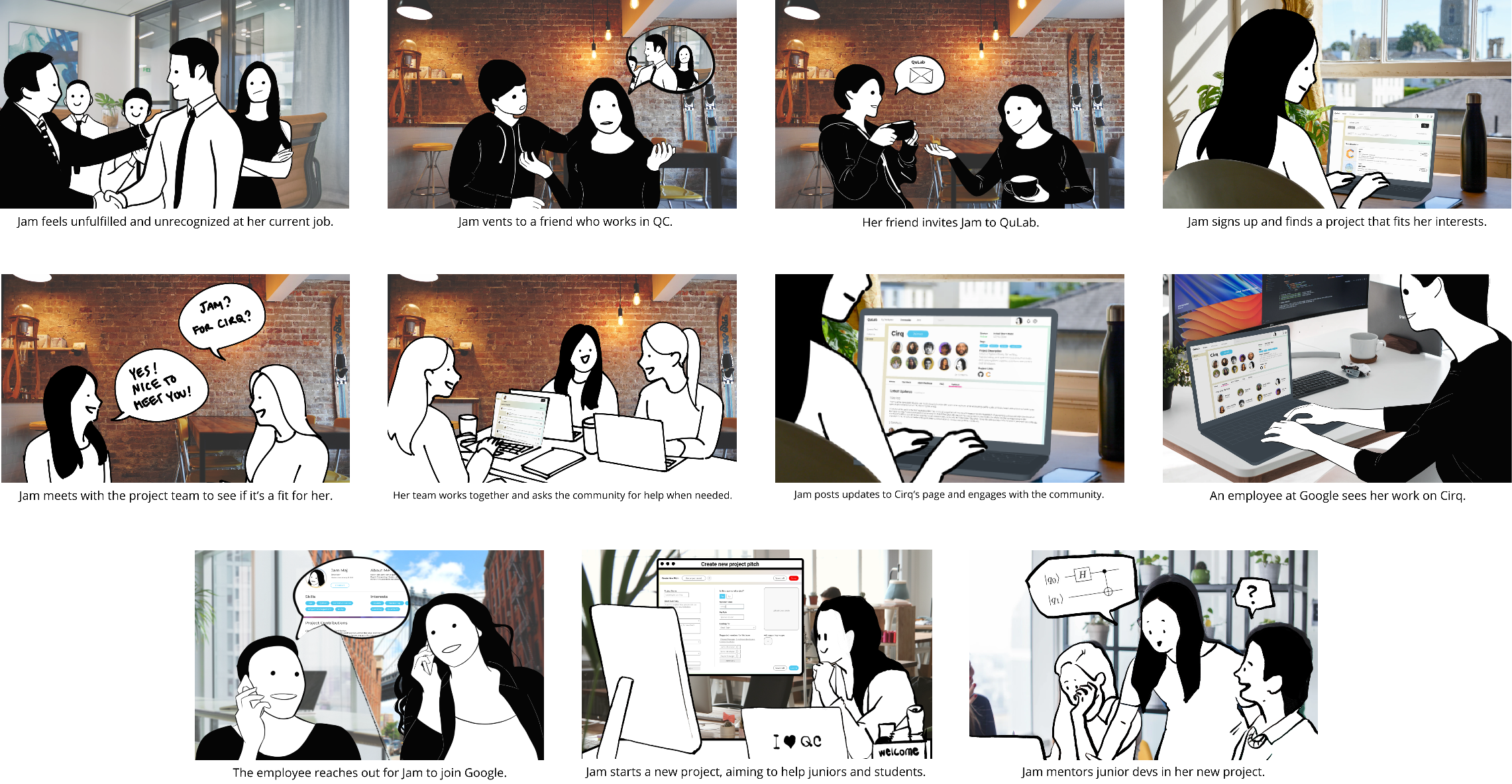 The final version of our storyboard.

For our final concept video, I sketched out another storyboard to help us plan it. The overall story remained the same as our other storyboard but this one focused more on what specific shots and actions to include in order to tell this story in video form. We also used this storyboard to plan out which scenes would go with which voiceover lines. 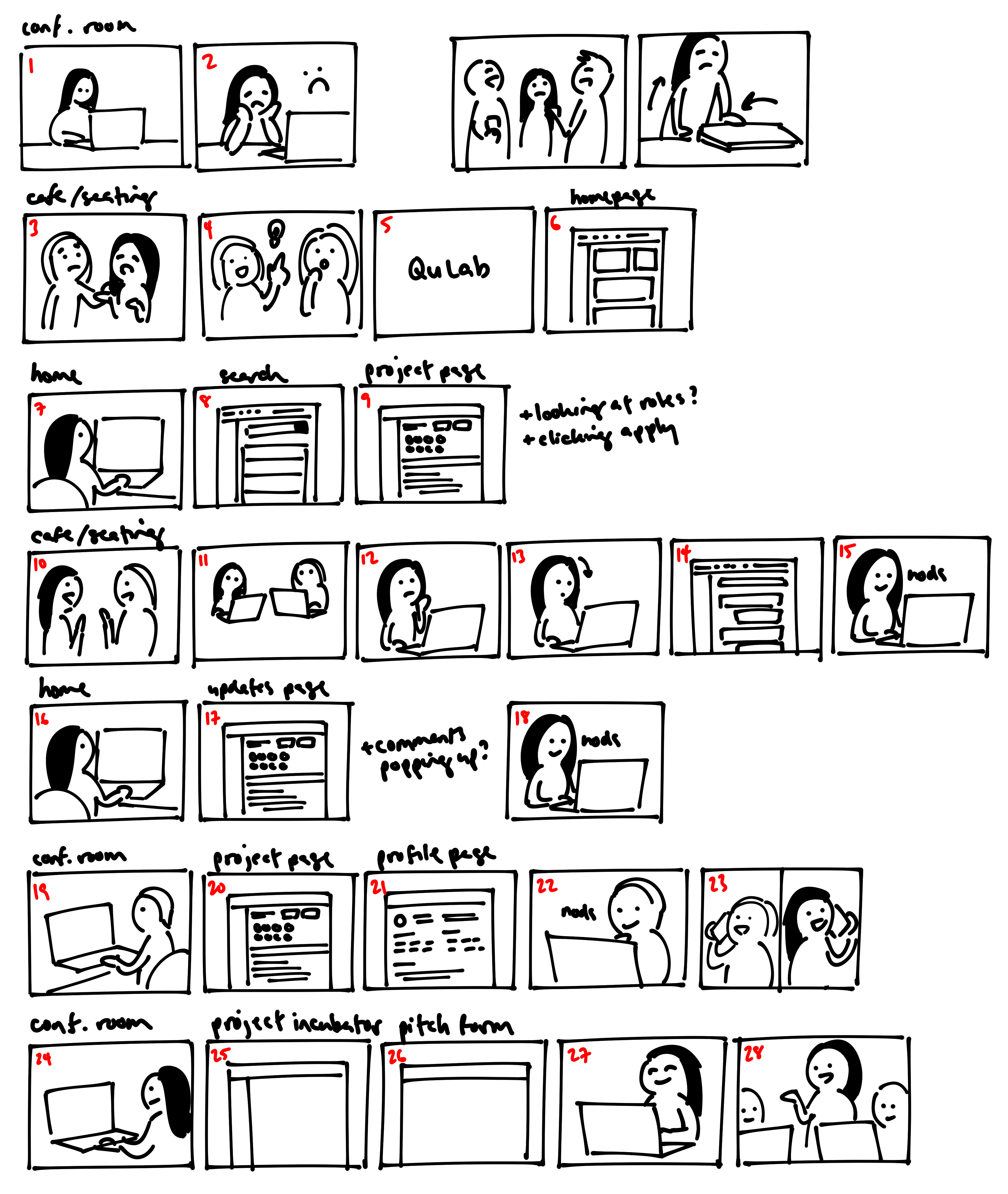 The video storyboard I drew to help plan out shots for our final concept video. 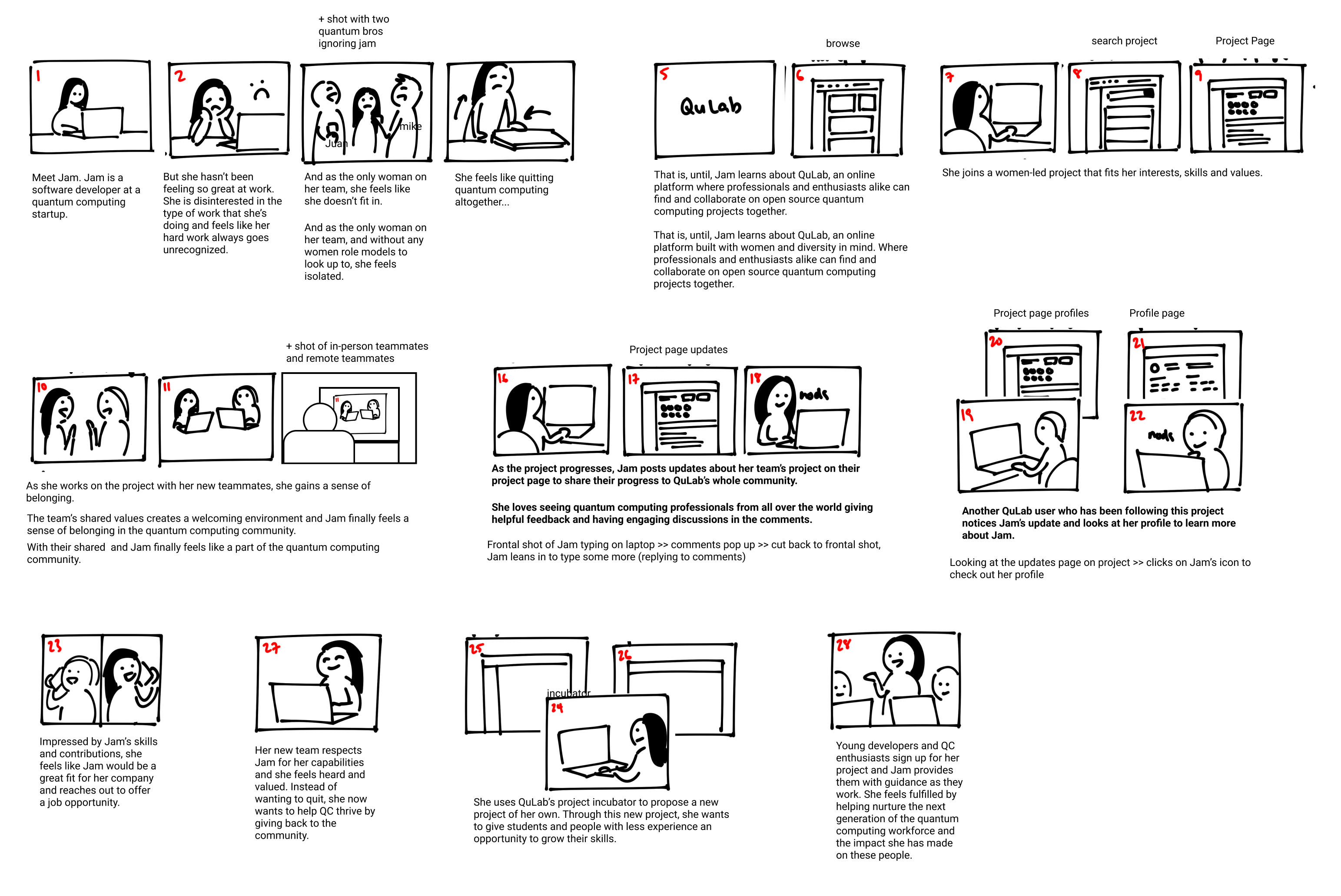 The edited storyboard. We removed unnecessary shots to cut down on video length and added in voiceover script lines to specify how to edit the video later.
The final concept video.